INSIDE WORKINGS OF IMF AND WORLD BANK 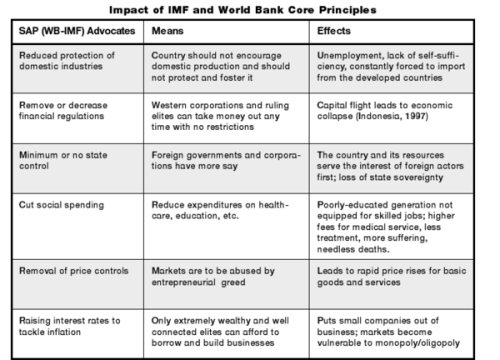 An organization and a financial institution, created under the disguise of helping the poor nations, while in reality, these entities are causing nothing but crisis, failures and suffering, stripping away the national assets and destroying the economies in the name of privatization and liberalization.

The information provided in this article, is based on investigation conducted by Gregory Palast ( a renowned journalist and a top investigator who obtained documents marked, ‘confidential’ and ‘restricted’ from an unidentified World bank employee), and a shocking inside story revealed by Joseph Stiglitz (Winner of Nobel prize in Economics) ex-chief economist of the World Bank.
Joseph Stiglitz was an insider, a whistle blower who was fired from World Bank in 1999.  He was not allowed quiet retirement, while US Treasury Secretary Larry Summers demanded a public excommunication for Stiglitz’ having expressed his first mild dissent from globalization World Bank style.

Please remember that Stiglitz cannot simply be dismissed as a conspiracy nutter. The man was inside the game – a member of Bill Clinton’s cabinet, chairman of the President’s council of economic advisers.  In April 2001, Greg conducted an exclusive interview of Stiglitz and it was published as an article “The IMF’s Four Steps to Damnation” in The Observer (London) and another version in The Big Issue – that’s the magazine that the homeless flog on platforms in the London Underground.

Big Issue offered equal space to the IMF, whose “deputy chief media officer” wrote:
“… I find it impossible to respond given the depth and breadth of hearsay and misinformation in [Palast’s] report.”
Of course it was difficult for the Deputy Chief to respond. The information (and documents) came from the unhappy lot inside his agency and the World Bank.

The inside workings of the IMF, the World Bank, and the bank’s 51% owner, the US Treasury.

There’s an assistance strategy for every poorer nation, designed, says the World Bank, after careful in-country investigation.  But according to insider Stiglitz, the Bank’s ‘investigation’ involves little more than close inspection of five-star hotels. It concludes with a meeting with a begging finance minister, who is handed a ‘restructuring agreement’ pre-drafted for ‘voluntary’ signature.

Each nation’s economy is analysed, then the Bank hands every minister the same four-step programme.

Step One is privatization.  Instead of objecting to the sell-offs of state industries, some politicians, using the World Bank’s demands to silence local critics, happily floggs their electricity and water companies, because of the possibility of receiving heavy commissions for shaving a few billion off the sale price.  Carefully selected individuals are  promoted through impression management with the help of media campaigns and money to influence to change voter’s perception. The same faces keep on rotating, with no alternate choices for public to chose their Representatives.  This happened  in the case of the biggest privatisation of all, the 1995 Russian sell-off.  The US-backed oligarchs stripped Russia’s industrial assets, with the effect that national output was cut nearly in half.  ‘The US Treasury view was: “This was great, as we wanted Yeltsin re-elected. We DON’T CARE if it’s a corrupt election.”

After privatization, Step Two is capital market liberalization. In theory this is a ‘hot money’ cycle that allows investment capital to flow in and out. Cash comes in for speculation in real estate and currency, then flees at the first whiff of trouble. A nation’s reserves can drain in days. A selective group, mainly the shareholders of major corporations and banks, controls the broad money supply, while chosen individuals are appointed for key positions at central banks. These individuals play key role in facilitating cash flow,  following the specific guidelines dictated by IMF.  For example in case of Indonesia and Brazil, the money simply flew out.  And when that happens, to seduce speculators into returning a nation’s own capital funds, the IMF demands these nations raise interest rates to 30%, 50% and 80%. The result is predictable;  Higher interest rates demolish property values, savage industrial production and drain national treasuries.

At this point, the IMF drags the gasping nation to Step Three: market-based pricing – a fancy term for raising prices on food, water, oil, electricity and cooking gas. This leads, predictably, to Step-Three-and-a-Half ‘the IMF riot’. The IMF riot is painfully predictable. When a nation is, ‘down and out, [the IMF] squeezes the last drop of blood out of them. They turn up the heat until, finally, the whole cauldron blows up,’ – as when the IMF eliminated food and fuel subsidies for the poor in Indonesia in 1998. Indonesia exploded into riots. There are other examples – the Bolivian riots over water prices and the riots in Ecuador over the rise in cooking gas prices imposed by the World Bank. These riots were totally expected.

According to several documents obtained from inside the World Bank, based on Interim Country Assistance Strategy for Ecuador, the Bank several times suggests – with cold accuracy – that the plans could be expected to spark ‘social unrest’. That’s not surprising. The secret report notes that the plan to make the US dollar Ecuador’s currency has pushed 51% of the population below the poverty line.

The IMF riots (means peaceful demonstrations dispersed by bullets, tanks and tear gas) cause new flights of capital and government bankruptcies This economic arson has its bright side – for foreigners, who can then pick off remaining assets at fire sale prices. A pattern emerges. There are lots of losers but the clear winners seem to be the western banks and US Treasury.

Finally arrives step four – free trade. This is free trade by the rules of the World Trade Organisation and the World Bank, like the Opium Wars in nineteenth century which too was about “opening markets”.  As in the nineteenth century, Europeans and Americans today are kicking down barriers to sales in Asia, Latin American and Africa while barricading their own markets against the Third World ‘s agriculture. In the Opium Wars, the West used military blockades. Today, the World Bank can order a financial blockade, which is just as effective and sometimes just as deadly.

The two major concerns about IMF and World Bank plans;

Did any nation avoid this fate? Yes, Botswana, by telling IMF to go packing. This information was provided by Joseph Stiglitz who proposes radical land reform: an attack on the 50% crop rents charged by the propertied oligarchies worldwide.

Why didn’t the World Bank and IMF follow his advice?

Because if you challenge [land ownership], that would be a change in the power of the elites. That’s not high on their agenda.

What drove Joseph Stiglitz to put his job on the line was the failure of the banks and US Treasury to change course when confronted with the crises, failures, and suffering perpetrated by their four-step monetarist mambo.

‘It’s a little like the Middle Ages,’ says the economist, ‘When the patient died they would say well, we stopped the bloodletting too soon, he still had a little blood in him.’ 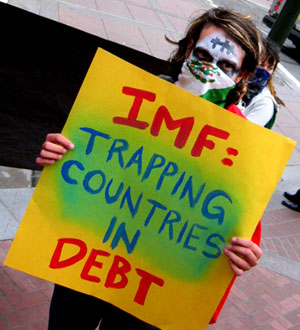